“A Time for Every Season,” Prep’s Virtual Winter Holiday Concert 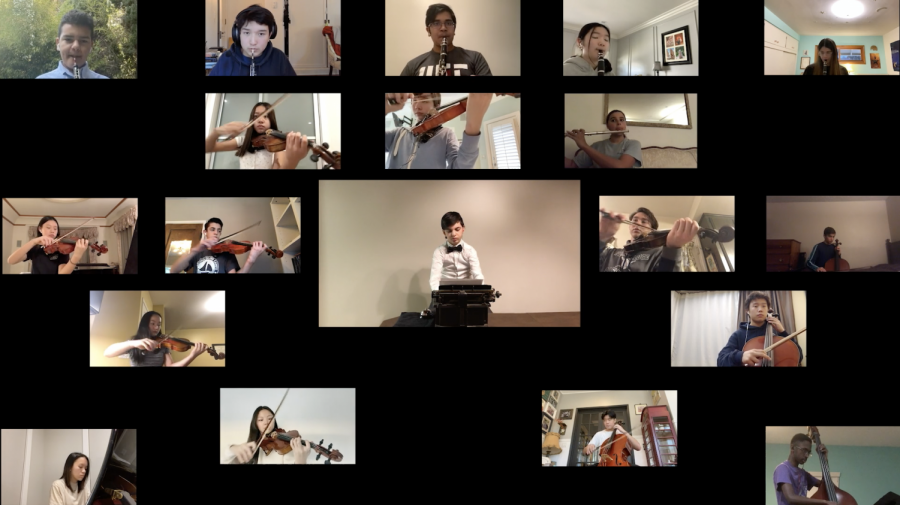 A screenshot of Prep's orchestra class performing in the virtual concert

Nothing can beat the magic of live performance, especially when it’s hearing seasonal music during the wintertime; everywhere you look, people and places are brimming with holiday spirit. Because of the times we find ourselves in, however, the annual Winter Vocal and Instrumental Concert that is a joyous amalgamation of the works produced by the vocal and instrumental departments was not able to take place in person. Despite that, a virtual concert was put together in its place, and it was a wonderful way to share the repertoire that Prep’s music students worked so hard on putting together over the course of the semester.

This year, the concert was entitled A Time for Every Season, a name symbolic of the change that has taken place as of late and will continue to take place over the course of our lives. The ensembles that took part in the concert were the Flintridge Singers, the Vocal Ensemble, Community Orchestra, Orchestra Class, Jazz Band, Jazz Rock Ensemble, and the 8th Grade Vocal and Instrumental Ensembles. There were also solo and duet “curtain acts,” performed by Oscar Yum ‘23, Emily Kim ‘23, Jasmine Jin ‘22, and Maxine Park ‘23. The virtual performance was edited together by Christopher Roney.

Similarly to the virtual concert that was compiled near the end of the previous year’s semester, each ensemble, instructed by either Mr. Hill or Dr. Margitza, was responsible for recording each individual instrumental or vocal part remotely. After receiving new scores and spending a few weeks practicing various repertoire, students would begin the recording process. They created a combination of video and audio performances, and ultimately, Christopher edited them together, along with scenic footage and heartwarming messages from Prep faculty members.

“The recording process got easier as it went on, so each song would take me less time to complete than the last,” says Clara Pierce ‘23, a member of both the Flintridge Singers and Vocal Ensemble. “I think that learning the skills needed to record the music will really help me in the future. It was difficult, but the hands-on experience has taught me new skills, and I hope to keep improving.”

“The recording for the winter concert was exciting but also tough at the same time,” says Natalie Leung ‘23, violinist and assistant concertmaster in the Community Orchestra as well as orchestra class. “You have to run the piece perfectly in one go. However, it was really nice seeing everyone’s recordings come together in the end!”

Recording a virtual concert is notably unlike what Prep’s music students have been used to doing in the past. Many miss the opportunity to perform together in person and long to experience the tension and energy that comes with putting on a live concert. However, as Pierce described, there is something to be said about learning new skills, as well as gaining new personal experiences with music that will prove to be valuable later on in life.

Whether the concert was viewed in person or through a Vimeo link, the hard work and dedication of Prep’s vocalists and instrumentalists still shined. Ultimately, the video provided the community with a heartwarming concert that sent students off to winter break with smiles on their faces and songs in their hearts.