The Emergence of the Los Angeles Rams 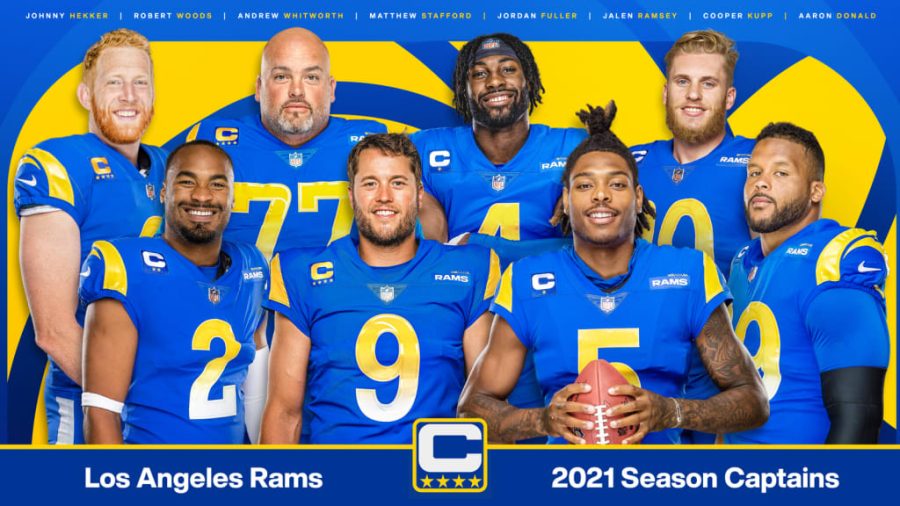 The Rams Captains (pictured above) hope to lead the Rams to a Super Bowl run this year (Photo Courtesy of Rams.com)

If I had to use one phrase to describe the Los Angeles Rams in 2021, it would simply be: all-in. From Jan 31, 2021, the day Matthew Stafford was traded to the Rams, to Nov 11, 2021, the day Odell Beckham Jr. signed, the Rams have consistently had their minds on winning a Super Bowl in SoFi Stadium.

It all started after their Super Bowl loss against the Patriots in 2019, when “Sean [McVay] lost touch with how much he was breaking Jared down, but there’s got to be the build back up, [McVay] was either unaware or disinterested in protecting Jared’s confidence”  according to ESPN sports. In the trade aftermath, McVay admitted to communication breakdowns with his quarterback. The Rams came to an agreement with the Detroit Lions on January 31st, to trade away two first round picks and Jared Goff for Matthew Stafford. While this trade did earn the Rams a quarterback upgrade, they lost two more 1st round picks. They had already traded two for Jalen Ramsey, so this put them in a situation without 1st round picks until 2024. This is sufficient evidence that the Rams are in a win-now environment.

The most interesting component of the Rams journey is that they have been in a win-now environment for years. Typically, NFL teams do not trade away all of their upcoming 1st round picks, and go far beyond the salary cap limit to obtain superstars, because that would theoretically set them up for a disappointing future. However, the Rams have kept on adding some of the NFL’s biggest names to their roster without stepping on the breaks. It truly is extraordinary that they are able to stay significantly above the salary, with so many phenomenal players. Regardless, burning 1st round picks on obtaining some of these players did help them afford acquired players in the long run. Also, they are simply able to maneuver around the cap, since none of the players on their team are in objection with their contracts. If there were hold-outs, then the players would be more reluctant to adjust their contracts. Therefore, the Rams will be able to retain their talented group of individuals, regardless of less 1st round picks, because they could keep their key players by adjusting contracts. Furthermore, the NFL always wants what is best for teams, and thus the fans, to generate revenue for itself. So, there would be no point in attempting to steer great players away from great teams, with great fan bases in big cities. (ahem, the Rams)

More recently, the Rams traded 2nd and 3rd round picks for 8-time Pro-Bowler Von Miller on November 1st. Since the Broncos were willing to pay for about half his contract before the deal, the Rams were able to afford yet another pass rusher, to complement Leonard Floyd and Aaron Donald.

On November 11th, the Rams signed Odell Beckham Jr. to a one-year contract. What more could a team possibly want? They seem to have filled every possible gap on their team, and have even added to their strengths. LA’s #1 football squad has a true super-team on paper, and anything less of a Super Bowl championship would not be ideal for all Rams fans. I would say that the Rams have mimicked the Buccaneers in many ways this season, whether it be from signing a new quarterback, or playing an additional star receiver midway through the year. Who knows? Maybe they could also win a Super Bowl at home. We, the NFL sports fans of LA will all wait to see.